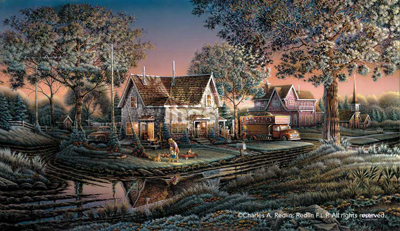 AP edition also available for $390 unframed. HIS FIRST FRIEND by Terry Redlin. The story begins with the American dream of home ownership as a young family moves from the farm into town. Their fixer-upper needs some tender love and care, but for now it is moving day. As they unpack the truck, they look forward to a whole new life for themselves and their young son. In this first scene, the young boy has a great surprise. He has just met his first friend, "Buddy." Terry Redlin remembers a similar move before first grade. "My dog was an orphan my parents found at a dance. I named him Bootsie, because he had four dark paws. Bootsie was my first friend."