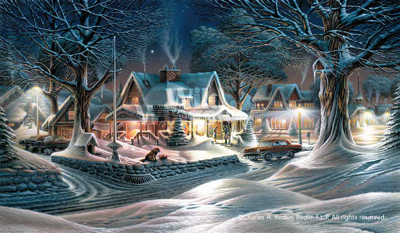 Artist Terry Redlin
AP edition also available for $390 unframed. HIS LAST GOOD-BYE by Terry Redlin. The neighborhood is aglow with lights as families prepare for the holiday season. Dad has been busy all day getting ready for his son's return. Mom has the tree decorated and lit. From the window, she sees a car slowly pull up to the front walk. She opens the door, expecting to embrace her son, but is horrified to see a representative from the Navy and a Chaplain walking up the steps. Our hearts sink as we realize it is not her son, but the devastating news that he has been killed in war. A very old Buddy knows his friend is never coming home. "His Last Goodbye" immerses us into the pain of this American family's ultimate loss. This series is a tribute to the memory of Terry Redlin's brother-in-law and good friend Charles Langenfeld. Charles, a Navy Hospital Corpman, was killed in the Siege of Khe Sanh during the Vietnam War in 1968. Like many Americans, Terry, his wife, Helene, and her family live forever with the pain of the ultimate loss.
More Artist Terry Redlin Limited Edition Print on Paper Fine Art