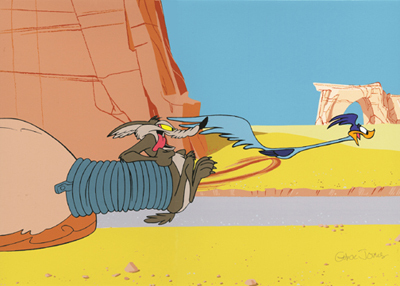 In 1994 Chuck Jones produced and directed the first Wile E. Coyote and Road Runner short film in over 30 years, Chariots of Fur. As it turned out, it was also the last one starring those characters created by the man who gave them life in 1949. The latest fine art 26 color hand-pulled serigraph captures an iconic scene from that film animated by the prolific, talented and mysterious Claude Raynes. Raynes has hand signed each piece.