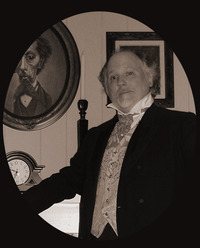 Bob Doucettes whimsical and highly saturated images come from the world of dreams. Sometimes bordering on psychedelic, his imagery is a product of a decade of theater work which included lots of puppet design and twenty three years in the world of animation. As a young boy he was denied the right to own dolls which propelled him to create his own. The repressed desire for dolls remains a driving force for his doll-like imagery. By tapping into his unconscious thoughts and the collective consciousness he is able to be personal and universal with his themes.

Bob earned a BFA at RISD and an MFA at CalARTS and studied both illustration and animation. His independently animated films won him many prestigious awards and honors and his MFA thesis film Pink Triangle is in the permanent collection at the New York Public Library. His Ben Franklin doll, created for the White House Christmas tree in 1999, is in the permanent collection of the Smithsonian. Many of his dolls are in the private collection of Demi Moore and have been featured in magazines articles, TV programs and sold in galleries. He was born in Waterville, Maine and at present lives in Los Angeles California with his husband. 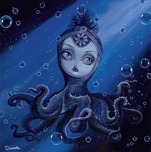 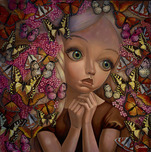 It's Time to Raise the Curtain

It's Time to Raise the Curtain

Mystery of the Missing Maid

Mystery of the Missing Maid

Pussycat Pussycat I love you

Pussycat Pussycat I love you

Teapot in a Tempest

Teapot in a Tempest

The Pepper and the Pig

The Pepper and the Pig

The Perils of Multi-Tasking

The Perils of Multi-Tasking

The Quiet Man Hears his Muse

The Quiet Man Hears his Muse

Limited Edition Giclee on Canvas Bob Doucette Fine Art
Do you have a question?
Fascination St. Fine Art is a brick and mortar gallery in Denver (Cherry Creek North), CO