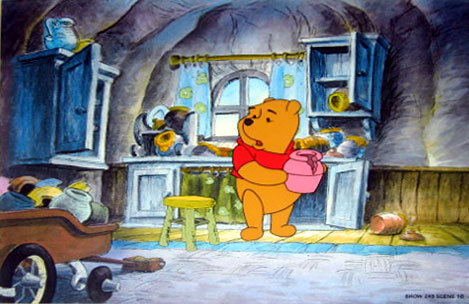 This cel is from "The New Adventures of Winnie the Pooh", which premiered in 1988, and was a comedy-adventure starring Winnie the Pooh and the other unforgettable characters from A.A. Milne's classic stories, including Piglet, Tigger, Rabbit, Eeyore, Owl, Kanga and Roo. The winsome characters of Milne's Hundred Acre Wood live in the imagination of young Christopher Robin, who joins them in a series of escapades filled with laughter and whimsy. This cel is taken from Show 24C, Scene 10 and has been authenticated with the Walt Disney Television seal on the lower right hand corner of the cel.

Go back
More Artist Walt Disney Production Cel Winnie the Pooh
Do you have a question?
Fascination St. Fine Art is a brick and mortar gallery in Denver (Cherry Creek North), CO